As an SDR leader you're probably not new to the very important business of games and contests on your sales team. Sales games and contests are a fantastic way to motivate your inside sales reps, especially if they're still selling remotely. It's important to keep in mind that SDR teams usually consist of very young professionals, sometimes straight out of college. Contests and games can be a great solution for them as they bridge the social and party-filled lifestyle of college with the more mature, results-oriented atmosphere of their first real job.

There are tons of articles online about games you can play with your SDR team, but none that focus on games that work with the tools you already use today. So, the question is... what sales contests, spiffs, and games are out there to help you and your team stay motivated, competitive, and having fun – all inside of Slack? We explore 6 of our favorite below.

Disclaimer: The games and contests below all are configured using SalesCompete (for use with Salesloft/Outreach.io and Slack), but you can still administer the basic premise of these games without the use of a bot.

This is a classic game you simply cannot go wrong with. When you're looking for a good pick-me-up for your team when you notice there's a lull in activity, this is the contest you want to go for. The rules of engagement are simple, yet effective. It's each man or woman for themselves. Choose a target metric (on our team we often choose the simple indicator of meetings booked, but you could also do most dials, most conversations held, or even most "no's". The team has exactly 60 minutes from the start of an hour to the top of it. If you're running the power hour in-person, set the team off right with motivating music playing throughout the whole hour. If remote, using a tool like SalesCompete or something similar is a vey effective way to make it feel like your team is in-person. As the reps connect calls, the whole team gets notified in Slack on one channel where the activity can be seen and the excitement builds.

The SDR role can often times be a very mundane and monotonous job, especially if you're stuck doing it remotely. Even the contests can sometimes be monotonous if you're doing the same ones over and over and over. To mix it up (and to build professional skills) try setting bounties ("spiffs" – these could be anything, cash rewards, dinners with the director, etc.) on specific named accounts. The first SDR to book a meeting with any contact at that account wins the bounty. To mix it up, you could also play this exact same contest but with groups or types of accounts. For example, this could be something like "first rep to book a meeting with a contact at any account in the legal industry."

This is another classic game – the tournament style contest where you pit one side (team) against the other. If your team is large enough you can choose to split folks off into numerous different teams where the top "seed" is the rep with the most number of meetings booked so far in the current month (or last month, you choose). If you have a smaller team, each individual rep can be their own "team". Determine what the metric will be to "win" each round of the tournament – but remember it can be fun to switch it up each round (and this also has the positive effect of not only giving others a chance to win, but testing various skills too). Top seed faces the lowest seed in each round, until the final round where just two "teams" (or individuals) are left.

OK, I confess. Spin the wheel isn't so much a game or contest specifically as it is a type of prize. Don't let this fool you though – spin the wheel can be a very effective way to take an ordinary, mundane sales contest and turn it into something special. The idea is simple – whoever wins the goal/contest you've set forth get to "spin the wheel" for the prize. The genius in this is in the chance of it all. Make sure to have at least 3 or more options for prizes, and make sure there's at least one awesome prize that is clearly better than the rest – that's what will get your reps more excited than anything else, and itching to play again and again.

Keep it in mind that sales doesn't always have to be about quotas, deals closed and meetings booked. We've actually found that a fantastic way to start off the day is with a simple game of trivia. We use the version in our own Slack bot for SDR teams as everyone can provide their answers over the course of 60 mins. Every morning at 9am the team receives a list of 3 jeopardy questions and then the winner is announced at exactly 10am. The leaderboard keeps the score over time so reps get to see how they rank compared to others and can see themselves move up the board over time. Another way to play it is with real-time trivia in Slack (using a tool such as Bored) where you all hop on a video call at a pre-determined time and rifle through a dozen or so questions that are shown to you rapid fire. The winner is chosen after just a few minutes. Either way you play it is worth mentioning that a 10-15 min break like this in the middle of a stressful workday can only end up being beneficial – it brings out camaraderie and positive energy to last the rest of the day.

And... that's the end of our list! If you take anything away from having read the above for the past few minutes, know that your team will thank you for the effort you put in to keeping the sales games, contests, and spiffs challenging, fun, and unique. Change them up every once in a while and make sure the team isn't just going through the motions – heck, even think about running a contest like trivia that doesn't necessarily have a spiff attached. SDRs like acknowledgement and recognition as much as they do cash (yes, it's sometimes true!) – ultimately they're not normally in the role they're in forever and they're going to appreciate good management later on in their career when they see it from you! 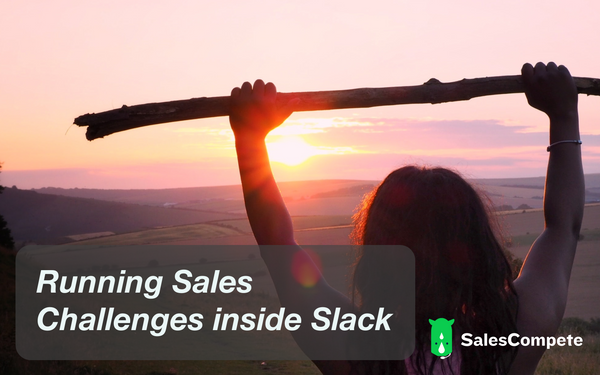 I must admit, we're very excited to have this release out the door. Ever since our team started working on SalesCompete over a year ago one of our goals had

Now use CompeteBot to see week-over-week change in your team's metrics, setup spin the wheel prizes for call games, and send team leaderboards to multiple channels.